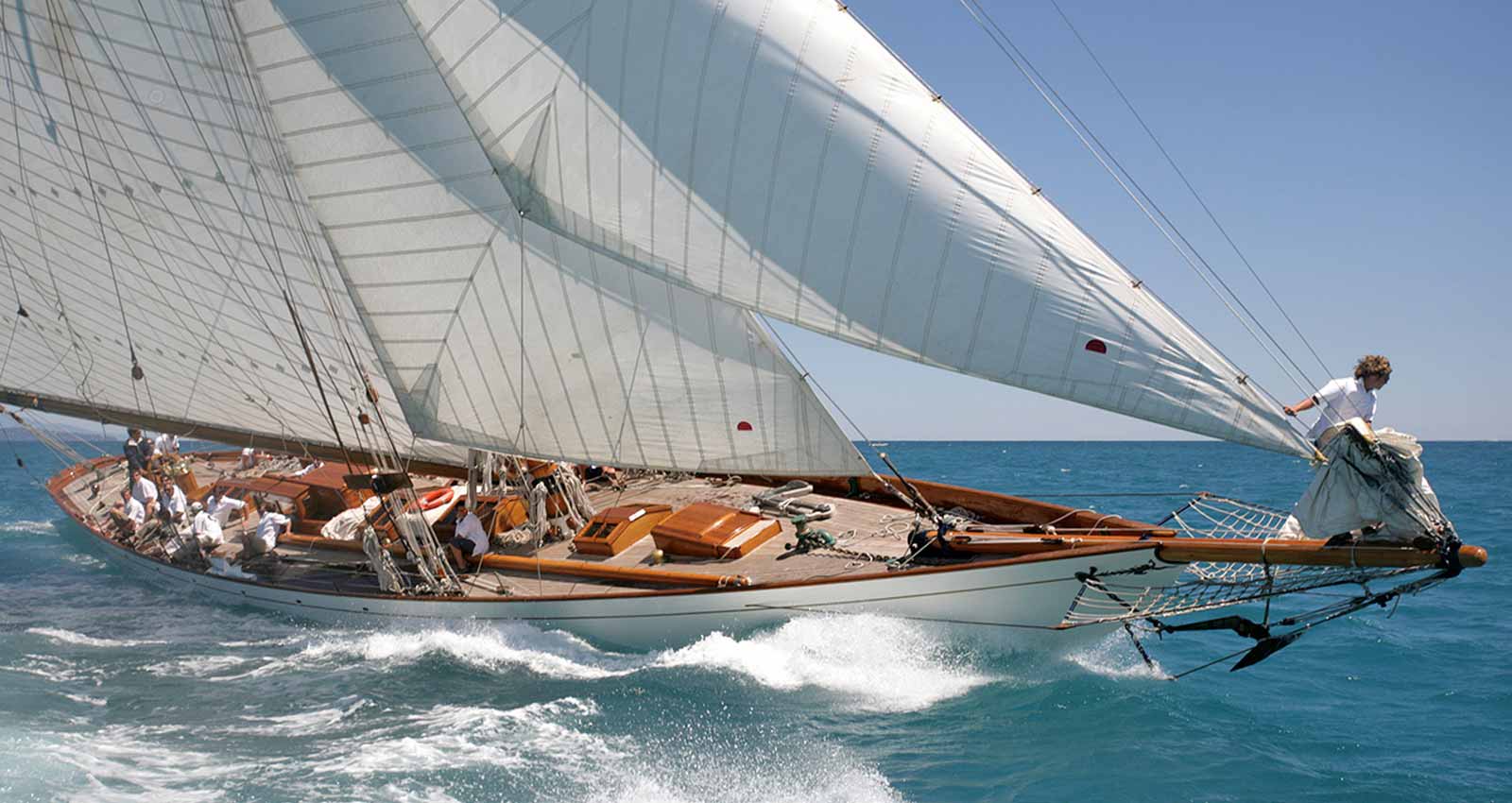 Max Oertz PESA belongs to the 1906 rule just as CINTRA and TUIGA do in the 12 and 15 m classes. After 1920, as the rule changed, the new designs were bigger and heavier for the same rating. In a short period, from 1906 to 1914, a lot of metre boats were built. The 10 m had less activity than the 8 m, where there were 55 new constructions. In France, we had five 10 metres built. It was an Olympic class and succeeded the 10 tonners defending "Coupe de France".

The 10 m were different with a bit more comfort than in any other class. On WESTA II, Sven Westerberg had ten berths for his large family, when the rule required four. My father had a 10 m and his five sons made up on average a 15 year-old crew. The 12 m was considered as the smallest class with sufficient accommodation for an owner with crew. But the 10 m with half displacement was the maximum size suitable for a family boat. It was not an ocean racer with such a low freeboard and only pumps draining the cockpit. Nevertheless, the Consul of Norway sailed Noreg right down to Nantes in 1910.

PESA belonged to the German fleet and raced in Kiel, Travemünde and Glücksburg. She raced with Scandinavian and Russian 10 m competitors. The name takes the first letters of the owners von Petri and Sack. PESA had many owners and was renamed GUDRUN, GISELA, ODIN, and RAJA V when the last owner came back to the original name in 1996. She is the last and 16th ten meter designed and built by Max Oertz from 1906 to 1911.

PESA is a sistership of FEINSLIEBCHEN VII with a few modifications on the keel shape and deck plan. In 1911 she was first two times out of three at Flensburg. The Kieler Woche results were two first places and two second. PESA was the best 10 m in the last prewar race : the 1914 Kieler Woche.

In 1919, Henry Kettle found her in a shed and sailed her to the Elbe river, but there was no more racing and he realized that a big ketch would be more suitable for the North Sea. PESA then returned to the Baltic, but the German fleet had been disbanded. FEINSLIEBCHEN VII went to Holland, ORCHIS to Great Britain ...

Then PESA took the name of two owner wives: Gudrun and Gisela. As ODIN she suffered as a houseboat in the thirties. She survived World War II in a shed at Neustad Holstein. In 1949, she was still there. In 1958, Wilhelm Perschmidt bought her and ordered many modifications at the Oehlmann boatyard to make her into a modern ocean racer with a marconi ketch rig. Under the number G 1014, she raced again in Travemünde and in the Nordsee Woche.

In 1979, PESA arrived in France and a second teak deck was built over the original. All her old rusty iron frames were changed to stainless steel.

Max Oertz, the famous German yachting designer, is relatively unknown in France. He designed Meteor IV for the Kaiser and FELCA, winner of La Coupe de France in 1906. His designing skills probably approached the level of Nathaniel Herreshoff. When Max Oertz designed FEINSLIEBCHEN VII, he was 38 and William Fife was 52. He worked in Finland and at St Petersburg before he founded his own boatyard in 1897 at Neuhof, near Hamburg. He participated in pioneer aviation, starting up the Göttingen aerodynamic laboratory and Hamburg airport.

When Jean-Yves Roubinet bought RAJA V in 1995, he came to me with the task of restoring her back to the original. By chance, I already had the drawings of FEINSLIEBCHEN VII, sent to me by Yacht Magazine in Hamburg.

We didn't find the actual line drawings of PESA. But the two keel versions of the two sisterships are identical. I also had the rating figures and calculated the modifications from the FEINSLIEBCHEN VII sailplan. PESA had a coach roof but F. VII was flush deck. I redesigned it from the deck plan of Midgard plus a 1913 picture. The headroom was then 1.75 instead of the 1.50 required by the rule. From the deck beams, I think that Pesa was flush deck at launching and modified later. We kept the roof for comfort.

One thing is a bit mysterious about these early 10 m. There is not much room for a flying jib between the fore and second stay. The rule measurements include the forestay, but I never found any picture or drawing of that ghostsail. The Norwegian ADORNA ex NOREG had a halyard displayed on a picture. I designed a small flying jib, and it works. On the 6 and 8 m there was no flying jib. On the twelves and over, there was a big one.

PESA is almost ready to be launched again.As PESA was often on land, the original mahogany planking was in pretty good condition but caulked. This is not correct for a metre boat. We removed it to get splines. The deck was totally rebuilt in oregon pine instead of the existing teak as we had to save weight because of the engine. She had a small Perkins which I moved to the centre under the table. The cabin roof is entirely of mahogany built the classical way with canvas on the top. There was no specific deck plan for PESA but three survive of the other Oertz ten metres. We got the deck fittings from Dauelsberg near Bremen in Germany and a few from Great Britain. We decided against winches, but the many blocks work perfectly. One hard and tough job is to trim the 95 sq.m. mainsail.

We had many matches with PEN DUICK and it seems much easier to handle a gaff rig with a flush deck. This rig doesn't require so much physical strength, but more time and attention. For instance, if you start to set all the sails ten minutes before the start, you will miss the topsail at the gun.

Regarding performances, PEN DUICK is heavy with the plank on edge style, PESA is lighter with a rather flat hull, less waterline length and a round bow. We were most of the time matched very close with an advantage for PEN DUICK in light weather and for PESA upwind over 15 knots.